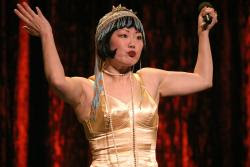 NO GUTS, DEFINITELY NO GLORY. Margaret Cho joins Whoopi Goldberg and Linda Ronstadt on the list of liberal performers who are paying the price for their beliefs. Unlike Goldberg and Ronstadt, though, Cho is being censored in advance. According to this press release, Cho has been dropped from a Unity ’04 event, scheduled for Avalon in Boston on Monday night, out of fear that her provocative material might harm John Kerry.

I am not surprised at the reversal in light of how the Kerry campaign has distanced itself from Whoopi's routine in response to the unrelenting media hype and Republican criticism. It's Whoopi's job as a comedian to say things that are sometimes shocking. I wish they could have backed her up. Dennis Miller can make gay jokes about Senators Kerry and Edwards at a recent Bush rally in Wisconsin to a complete absence of media scrutiny. No one demanded a tape of that event or alleged that his comments as a comedian might reflect poorly on Bush.

According to this AP report, a new bit by Cho on the Iraqi prison scandal is so over-the-top that she had to be escorted from the stage. And the problem is what, exactly?

Perhaps the Kerry campaign didn't have anything to do with this. Perhaps the Human Rights Campaign and the other gay-rights groups organizing this event did it on their own, not wanting to embarrass the nominee.

If that's the case, there's a simple solution. Kerry should personally re-invite Cho back onto the program. After all, if this is how the Democrats and their allies are going to behave, what, precisely, is the point of having Democrats?

Simmer down, Deekay, the elephants "censor" their right-wing *politicians* at the GOP convetion in order to appeal to the terminally stupid and lazy, uh, I mean undecided. Besides, is the point of the Democrats to serve as a stage for the weird, marginal, and ridiculous, to the detriment of their chances for electoral success? Me thinks not.

I sent the (intentionally ironic) email below to the HRC. I await their reply.

I read today that Margaret Cho was censored from the Unity '04 event. As a long time supporter of the HRC, I want to make sure that this libelous accusation is not true. I know that you would never be stupid enough or vile enough to send such a great performer packing.

Please reply with all haste.

Thank you for your help and your continued support of civil liberties,

The Boston Phoenix's Media Log was launched in 2002 by the paper's then-media columnist, Dan Kennedy, who continued it until he left the paper in 2005. The Phoenix's current media columnist, Adam Reilly, is now the author of Media Log, which has since been renamed Don't Quote Me. Kennedy, an assistant professor of journalism at Northeastern University, blogs at Media Nation.

The contents of Media Log Archives are copyright © by the Boston Phoenix Inc., 2002-2005. They have been republished on this site by permission.