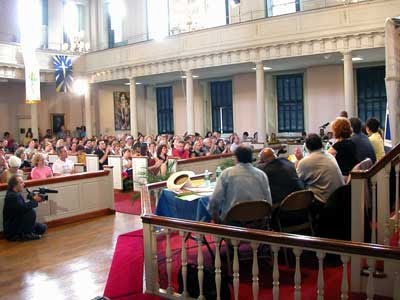 REMEMBERING PAUL WELLSTONE. From the time he entered the Senate, Paul Wellstone was someone about whom I was aware, if not particularly familiar. My first real exposure to him came during the 2000 presidential campaign. Wellstone was supporting Democratic candidate Bill Bradley, who struck me as a priggish jerk. Bradley couldn't make it onto one of the talking-heads shows, so Wellstone filled in. It was a revelation. He was smart, funny, charming, self-deprecating, and every bit the progressive that Bradley only pretended to be.

A little more than two years later, Wellstone died in a plane crash while campaigning for re-election in Minnesota. It was a tragedy that redounded doubly to the Republicans' benefit when they and their conservative media allies (Rush Limbaugh, Fox News) grotesquely exaggerated a few partisan moments that took place at Wellstone's memorial service.

Late Sunday afternoon, I dropped by the Old West Church, a few blocks from Government Center, to attend a Wellstone remembrance to benefit the Union of Minority Neighborhoods and Massachusetts Jobs with Justice. Several hundred people were jammed inside as the likes of Al Franken, Arianna Huffington, Jim Hightower, and Boston city councilor Chuck Turner paid tribute to the most progressive member of the Senate. Neither Boston daily covered the event. No, it wasn't newsworthy, but neither were the dozens of parties that the Globe and the Herald reported on today. For that matter, neither is the convention itself, unless you think there is some chance that the delegates are going to choose a ticket other than John Kerry and John Edwards.

The most noteworthy aspect of the tribute was the way that what one observer called "the responsible left and the looney left" invoked Wellstone's memory to advance their particular agenda. Franken, Huffington, and Hightower - the responsible left (and Franken isn't all that left) - insisted that Wellstone would be working hard for Kerry.

Indeed, Huffington, who got a big assist from Wellstone in organizing the lefty Shadow Conventions at the Democratic and Republican conventions four years ago, went so far as to say that Wellstone wouldn't have even wanted a Shadow Convention at the DNC this year, so committed would he have been to electing Kerry and defeating George W. Bush. "When your house is on fire, it's not the time for remodeling," she said.

Franken followed a rousing call by California congresswoman Barbara Lee to bring the troops home by arguing that that's "easier said than done," noting that Secretary of State Colin Powell had warned Bush that if he invaded Iraq, "You break it, you own it." He also puckishly suggested that Kerry recycle one of Bush's 2000 campaign slogans - "I'm a uniter, not a divider" - with the difference being that Kerry could actually mean it.

So far, so good. But then Turner asserted that King "was killed by government forces.... I believe it. Hopefully you believe it." Now it's true that conspiracy theories abound about King's assassination, and that the King family itself believes them. But all credible evidence points to the guilt of one lone racist, James Earl Ray. Never mind. The crowd applauded.

Turner continued: "Brothers and sisters, let's be real. The military-industrial complex has control of both parties." More loud applause. Okay, I suppose you could make the point with Halliburton. But both parties? The Democrats are not pure, but come on.

Turner also accused Kerry, like Bill Clinton, of being "controlled" by the Democratic Leadership Council, a "New Democrat" group of moderate centrists. "Kerry isn't prepared - mentally, emotionally, spiritually - to be the president we need," said Turner, arguing that though he supports Kerry's election, progressives will have to pressure him from the left if he becomes president. Now, Kerry isn't Wellstone, but he's considerably more liberal than Clinton.

"We can purge the cancer from the soul of the body politic," Turner said. And, returning to the King theme, he concluded, "If there's nothing worth living for, there's nothing worth dying for." The applause was loud and intense, punctuated by a few dozen people giving him a standing ovation.

Turner's remarks represented exactly what Kerry doesn't need if he's going to defeat Bush: a hard-left wing supporting him while simultaneously hectoring him, overladen with anger and conspiracy theories. It's too bad Paul Wellstone wasn't there to stand up to Turner's stridency.

MORE ALLEGED NEWS. Will the dinosaurs of broadcast journalism please stop whining about the fact that the networks are showing only three hours of the Democratic convention this week? PBS's Jim Lehrer was aghast at Sunday's Shorenstein Center get-together, as Mark Jurkowitz reports in today's Boston Globe.

To which I say: the networks should cover news, and there is no news to be made this week. Conventions used to pick the candidates; now primary voters and caucus-goers do that. Why there needs to be obligatory coverage of anything other than the speeches of the presidential and vice-presidential speeches is beyond me.

Lehrer called the DNC "four of the eight most important days we can possibly have as a nation." Good Lord! Not even close. The debates - which you'd think Lehrer might have some recollection of, given that he's passively presided over a few of them - are infinitely more important.

Today people have choices. An enormous amount of convention coverage is being carried by CNN, MSNBC, Fox News, C-SPAN, and, for those who don't get cable, Lehrer's own PBS. Essentially Lehrer is arguing that viewers should be forced to watch an infomercial. Gee, maybe the off switch could be remotely disabled this week as well.

The Boston Phoenix's Media Log was launched in 2002 by the paper's then-media columnist, Dan Kennedy, who continued it until he left the paper in 2005. The Phoenix's current media columnist, Adam Reilly, is now the author of Media Log, which has since been renamed Don't Quote Me. Kennedy, an assistant professor of journalism at Northeastern University, blogs at Media Nation.

The contents of Media Log Archives are copyright © by the Boston Phoenix Inc., 2002-2005. They have been republished on this site by permission.